We’ve noticed that a number of debt relief and debt consolidation companies are advertising that they offer a “government approved” credit card debt consolidation program. We think it’s important that you know what is misleading about this claim and what programs are available that have a connection to the government at some level.

Why the Claim “Government Approved” Debt Consolidation Program is Misleading 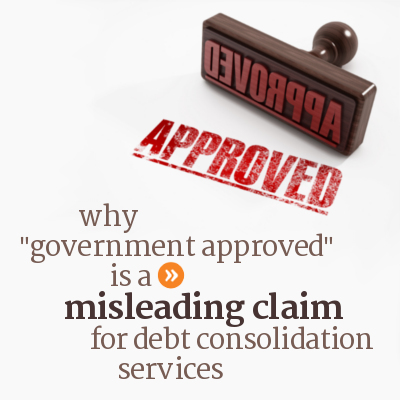 The first thing you should know is that no government in Canada – federal, provincial, or municipal – officially approves any debt consolidation program. Any company making this claim is embellishing what they are selling and are doing so using a misleading claim.

What these companies mean by claiming to be "government approved" is likely one of two things:

Just because a company is licensed by the government or offers a service that is regulated by government legislation does not mean that the company or their service is “approved” by the government. A local restaurant needs a government license to operate, but it would be misleading for them to advertise that their food or service is “government approved.” Banks are governed in Canada by the Bank Act, but that doesn’t mean it would be appropriate for them to start advertising that their services are “government approved.”

What Credit Card Debt Consolidation Programs Have a Government Connection

The following programs are often used for consolidating credit card debt that people can no longer manage to pay. The table below also shows the government connection that each program has.

Who the Government Refers People To

At times, various government agencies actually do refer people they come in contact with to different credit and debt counselling services. However, just because they refer to an organization or work with them on various projects to help Canadians doesn’t mean that a government officially approves or endorses any organization. In our experience, organizations that are held in high regard by Canadian government agencies don’t publicize the fact that the government trusts them.

We can’t speak for the government. So it wouldn’t be appropriate for us to publish a list of which debt consolidation agencies governments across Canada seem to trust. However, it would be accurate to say that they are typically the leading non-profit credit counselling organizations in their province.

What We Would Recommend

We have created a list of quality non-profits across Canada that can help you look at consolidating your credit card debt. Some organizations on our list are large and some are small, community based organizations. All of them are accredited by Credit Counselling Canada (who has the highest standard of accreditation in Canada), and all of them will help you take a look at all your options and see what will work best for you. If any one of the programs mentioned above makes sense for your situation, they can either help get you onto the program or they can refer you to a professional in your area who can.

Don’t be taken in by misleading talk of government approved credit card debt consolidation programs. Find a good non-profit Credit Counsellor near you who’s not selling anything, and only has your best interests at heart. They’ll help you find the right solution for your situation and help set you up for long-term success.

<< Back to the blog main page

I read up on this over the weekend. Looked at a program that is offered for a small fee. It seemed legitimate.
Hopefully you find one that works well for your situation, Roy. Any of the programs listed above can be a good fit for someone with the right set of circumstances. What you need, though, is someone in your province who can objectively help you look at all of them and find which one is going to do the best job of helping you achieve your financial goals. We offer some more tips here on how to find a quality agency to help you work through your options: http://www.mymoneycoach.ca/blog/how-to-find-best-debt-help-services-canada. You can also call the Consumer Protection authority in your province, tell them about the company and program you're thinking of going with, and see if everything sounds okay to them. If they're aware of problems with the company or program you're looking at, they'll caution you or steer you in another direction.